While there are many factors impacting the state’s water supplies, the good news is there are many actions that can be taken.  The key is in building a diverse portfolio of water supplies that minimizes potential impacts and increases supply reliability under a variety of operational and hydrologic conditions. 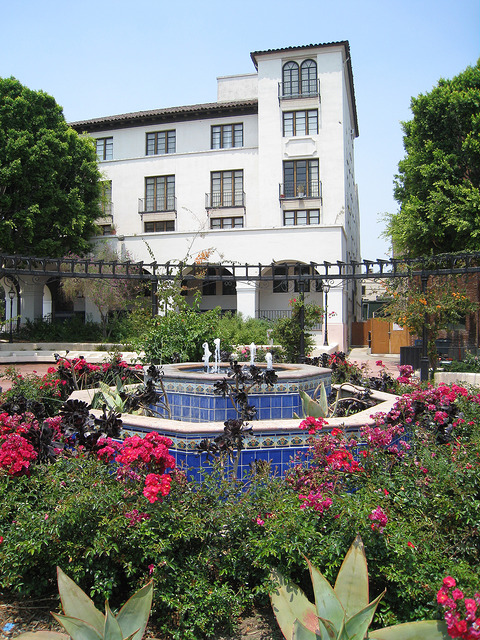 California’s modern history is written in gold mining, railroads, and most recently, the development of water.
Two massive water projects as well as several smaller systems have been built to irrigate millions of acres of farmland and to slake the thirst of growing population centers of Southern California and the Bay Area; this in turn has fueled California’s trillion dollar economy, making it the sixth largest in the world, the nation’s most populous state, and the leading agricultural producer and exporter of agricultural goods.
However, California now faces monumental challenges in meeting the water demand of its residents, industries, and agricultural producers.

There are numerous factors impacting the state’s water supplies.  Here are some of them:
Growing demand: In 1900, California was home to less than 2 million people; by 1950 the population had reached 10 million. California’s population nearly tripled in the last half of the 20th century, and its growth rate remained much higher than that of the rest of the United States, although it has slowed in recent years.  California’s current population is estimated at close to 39 million people as of January 1, 2015.  While water use per capita has been reduced, a growing population will likely continue to drive increasing demand for water.  Click here for more on California’s population trends.

Drought and hydrologic variability:  California’s climate and hydrology are unlike any other in the nation, characterized by dramatic variability and uncertainty.  Not only do climatic conditions range from temperate rain forest conditions in the north to the arid deserts of the south, but also precipitation varies from year to year, anywhere from deep droughts in one year to punishing floods in the next.  There simply is no such thing as an average year in California hydrology, which makes managing water in this state particularly challenging.
Environmental regulations and conflicting human-species needs:  Most of California’s water infrastructure projects were designed and constructed at a time when delivering cheap water to feed economic development was a goal, and ecosystem and species concerns were rarely considered.  However, changing societal values have meant increased restrictions and regulations to protect endangered species, which in turn has reduced the amount that can be withdrawn from our waterways.  This has fueled political wars that have stretched on for decades as demands for water from agriculture, cities and industry must be constantly balanced against the need for maintaining water quality and protecting fisheries and wildlife.

Groundwater management: Groundwater accounts on average for 40% of total annual agricultural and urban water uses statewide in an average year, and up to 65% or more in drought years.  However, in most years, significantly more groundwater is withdrawn then is replenished, causing many groundwater basins in the state to become overdrafted.   In September of 2014, the Sustainable Groundwater Management Act (SGMA) was passed, setting in motion a plan to sustainably manage the state’s groundwater basins.  While many groundwater basins in the state have been managed sustainably, there are also many basins that have been impacted by the over-extraction of groundwater.  In order to achieve sustainable groundwater management as required by SGMA, these basins will have to reduce their use and dependence upon groundwater, which will put more stress on the already over-allocated surface water supplies.  Click here to learn more about California’s groundwater. 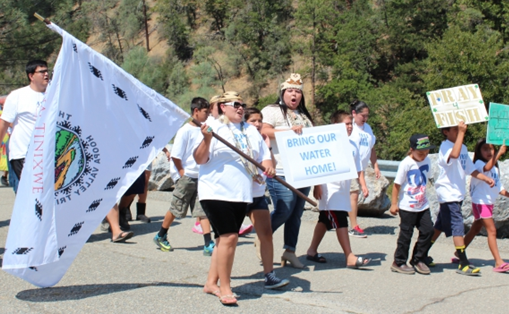 Indian water rights: Native Americans were promised water from the federal government when they were given reservations in the Southwest; however, Native American tribes were left out of the 1922 Colorado River Compact and other water negotiations, and still today, many tribes remain unable to access their water rights.  Those rights were affirmed by the Supreme Court in 1908 in a ruling known as the Winters decision that recognized those rights as established at the time the reservation was created; the court also ruled that those rights are reserved for the tribes, whether they are using the water or not.  However, in order to exercise those rights, the water rights must be first quantified either by litigation or congressional action.  While Congress has authorized 28 Indian water rights settlements, the water rights claims of many more tribes remain unquantified and their potential impact still unknown.  Click here to learn more about Indian reserved water rights.
Aging infrastructure:  Water infrastructure is critical to ensuring a reliable water supply for our cities and farms, but much of the state’s water infrastructure, built in the mid-20thcentury, has aged well beyond its usable life and is prone to failure.  While some agencies have built regional projects to increase local water supply and storage, California’s state and federal water systems have not seen any major upgrades since the State Water Project was completed in 1973, despite the addition of nearly 14 million residents.  Water utilities are responsible for maintaining reliable water systems to ensure supply, quality, public health, and safety, but they are facing significant state and federal funding hurdles as multiple generations of infrastructure wear out.  According to the ASCE 2017 Infrastructure Report Card, drinking water needs in California are an estimated $44.5 billion; wastewater needs total $26.2 billion; and 678 dams are considered to be high-hazard potential.

Climate change:  The effects of climate change are already impacting California’s water resources, and despite the state’s aggressive climate policies, these effects will only continue to worsen.   The snowpack in the Sierra, which provides about a third of California’s water supplies is projected to shrink by 48%-65%, reducing the reliability of imported water supplies and increasing demand for groundwater resources.  More precipitation will fall as rain instead of snow, exacerbating flood risks and adding additional challenges for water supply reliability.  More variable weather patterns with more extreme weather events will result in greater flood risks while droughts will likely become longer and move severe.  Sea levels will continue to rise, threatening the stability of Delta levees and requiring more fresh water to keep saltwater intrusion at bay.  Rising sea levels could exacerbate seawater intrusion into coastal aquifers.  Click here to learn more about climate change and California’s water resources.

Delta issues: The Delta is many things to many people: it is the largest estuary on the west coast, it is home to a half-million residents as well as a vast array of wildlife, it is a productive agricultural region, it is a recreational paradise for boating and water sports, it is a fishing spot, and it is the hub for the state’s water infrastructure.  However, these competing uses have taken their toll on the estuary: the sensitive ecosystem is in decline with native species populations plummeting, invasive species and aquatic vegetation are flourishing, there are concerns about the stability of the levee system, and some areas experience water quality issues.  In 2009, the legislature passed the Delta Reform Act, which defined the coequal goals of restoring the Delta’s ecosystem and providing a reliable water supply as an overarching state policy; it also set a state policy of requiring reduced reliance on the Delta.  However, despite the efforts of agencies and others, the Delta ecosystem remains in decline, and whether or not California Water Fix (aka the Delta tunnels) are built, the ecosystem and native species issues must be addressed.  Click here to take a photo tour of the Delta.

THE NEED FOR REGIONAL WATER MANAGEMENT

Although the 2009 Delta Reform Act set a state policy of reducing reliance on the Delta through improved regional supplies, California’s march towards more regional self-reliance actually began in 2002 when the legislature passed the Integrated Regional Water Management Planning Act.

The legislation encouraged local and regional agencies to work together to establish a foundation for regional water management; subsequent voter-approved bond funding provided grant funding to support development and implementation of regional water management solutions.  The effort has been successful; currently, over 48 Integrated Regional Water Management (IRWM) groups have been established, covering over 87 percent of the State’s area and 99 percent of its population.
The IRWM groups are comprised of water districts, flood control agencies, sanitation districts, cities, counties, community groups, environmental organizations, and others who work together to implement projects that address the issues facing that particular region; 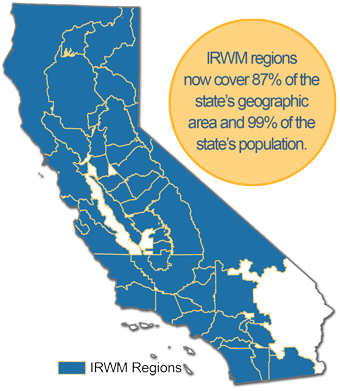 those issues can include limited groundwater and surface water supplies, drought, flooding, climate change, water quality, environmental degradation, and aging infrastructure.
As of December 2016, approximately $1.3 billion in state grants have been awarded to regional water management groups; this state investment has been matched by approximately $4.2 billion in local and regional investments and has resulted in the implementation of approximately 840 projects throughout the state. These projects have provided benefits such as increased water supplies, improved water quality, reduced water demand, improved flood protection, and ecosystem preservation and enhancement.
Click here to learn more about Integrated Regional Water Management.

THE GOOD NEWS: THERE ARE MANY OPTIONS

While there is no silver bullet solution, the good news is that there area number of tools in toolbox that a region or locality can use to ensure their water supply reliability; which tools are appropriate to use will vary by region.  The key is to build a diverse portfolio of water supplies that minimizes potential impacts and increases supply reliability under a variety of operational and hydrologic conditions.
Creating “more” available water for beneficial uses can be done by either reducing demand through conservation efforts thereby freeing up additional water for other uses, by implementing projects that clean up sources of water that are otherwise unusable, or by capturing water for human use that would otherwise be lost.
Below are the major tools in the toolbox that address either reducing demand or increasing water supplies.
As originally posted in Maven’s Notebook.
Original URL: https://mavensnotebook.com/more-reliable-water-supplies-for-california/