Tuesday, January 30, 2018, 13:33 – The Colorado River is essential for life in the southwest U.S. and northwest Mexico. It provides water for over 35 million people and over 5 million acres of farmland. Close to 18 million of those residents live in the greater Los Angeles area, the second most populated city in the country.

The sixth longest river in the U.S. is 1,450 miles long and drops about 10,000 feet from the Rocky Mountains into the Gulf of California while traversing a total of seven states. It has been tapped by humans for almost 1500 years, and today more water is exported from its basin than from any other river in the US.
Below: Water levels at the Colorado River at Lake Mead 2001 (top) vs 2015 (bottom) from US Department of Interior

Water from the Colorado River goes a long way, as it travels over the Continental Divide into Denver and other Front Range cities. It also gets diverted into to Utah’s Salt Lake Valley and to the Rio Grande basin. Cities like Albuquerque in New Mexico or Cheyenne in Wyoming drink it’s water, but so do other major urban areas far from the Rockies like Los Angeles and San Diego in Southern California.
Below: Map of Colorado River basin

About 90 percent of the water for the entire basin comes from the Upper Colorado River. Water that originates in high terrain from snowmelt and precipitation in the Rocky and Wasatch Mountains. About 50 percent of stream flow comes from base flow, surface water that percolates into groundwater aquifers and then resurfaces as stream flow.
Drought, rising temperatures and population growth have contributed to a drying Colorado River. Since 2000, the basin has been experiencing an intense and extended drought that has impacted regional water supplies, hydropower, recreation and ecologic services. Sixteen of those 19 years have been characterized by the lowest period of inflow in over 100 years, with the river lately running at half capacity.
Below: Colorado River Flow from US Department of the Interior

The water supply of the basin is highly variable, as yearly precipitation and snowmelt have been shaped by natural variations of climate and with anthropogenic climate change impact in the region.

The drought that began affecting the Colorado River Basin in 2000 has been present off and on until current times. On average flows are 16% lower than the long-term average with the exception of 2011 which experienced 135% of average flow.

2017 meant a turning point in terms of precipitation for much of the Southwest. Abundant rain and snow fell from California to the Rockies, bringing water levels in the Colorado and other of the regions basins well above average.  As a matter of fact, some reservoirs in the region are now full enough to guarantee water supplies this year despite many areas of the southwest already experiencing negative precipitation values from the later part of 2017 into early 2018.
Below: Lake Mead Water Levels

But despite the plentiful precipitation events registered during the winter and spring months of 2017, together with a very active summer monsoon in the southwest, some of the main reservoirs in the region like Lake Mead, are expected to continue dropping in time. Since the drought began in 2000, Lake Mead has seen water levels decline close 140 feet.
elow: Upper Colorado River Basin Snowpack from the US Dept of Interior

The figure above shows how November 2017 registered some reasonable precipitation values in the basin, at least close to those experienced in 2015 and during the early stages of 2017. Then came December, with a plunge in precipitation and that has been the norm pretty much in January 2018.
Below: Colorado River Basin average precipitation from the US Dept of Interior

Snowpack, one of the main water sources for the Upper Basin’s total volume, went on a steady rise in November 2017. It was initially on track with the expected values for the time of year, but then in December it started declining. As of late January values are well below some of the driest years on record like 2015.
Below: Upper Colorado Basin snowpack last 7 years

Actually, if one compares 2018 among the past 7 years of snow pack in the basin, this is by far one of the most deficient years, very similar to 2012, which turned out to be high on the list of the driest and warmest years on record in the region.

How could drought in the Rockies affect water supplies in Southern California?

The water Southern Californian’s use to drink, shower or water their gardens, comes from a variety of sources, but about 90% of it is imported.
The main sources include the Colorado River Basin and the San Joaquin-Sacramento River Delta. Water from the two sources travels hundreds of miles through canals and pipelines making the entire network, the largest aqueduct in the world. 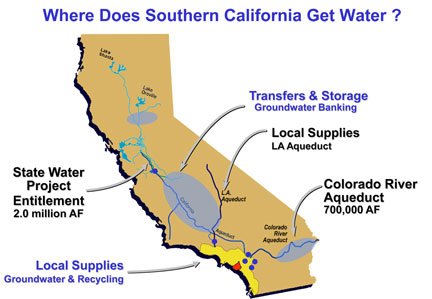 Overall, the main core of the water supplied comes from the Colorado River, although an important amount is also driven from the Sierra Nevada range to the north. Other significant sources include local groundwater, storm water and recycled water.
When the amount the snowpack that feeds the Colorado River dwindles, water shortages become an issue in areas of Greater Los Angeles  or even in San Diego. If on top of that the snowpack in the Sierra Nevada’s is reduced, as has been the case many years this century due to well above average temperatures and drier weather patterns, then the problem becomes exponential.
As of late January 2018, drought continues to expand and intensify across the Four Corner states and their mountains. The terrain that feeds the always thirsty Colorado River as it flows towards the arid environment of Arizona, Southern California and northwest Mexico is much drier than past dry years.
While moderate to severe drought continues to spread across large portions of Colorado, Utah, New Mexico and Arizona, where water shortages could become an issue later in the year, forecasts for the coming months are not exactly good news. Overall, February, March and April, that is, the core months of the snow season, are expected to be drier and warmer than average across much of the region.
As originally published on The Weather Network by Dr. Mario Picazo on January 30, 2018
Original URL: https://www.theweathernetwork.com/us/news/articles/colorado-river-california-water-supply